Rest in Peace, Yogi. Thank you for the joy that you have given baseball fans for over sixty years. Thank you for the quotes, mixed-up, but dead-on philosophies and your quiet strength.
For your beliefs, your strength of conviction and your amazing outlook on life.
The media world will be filled with your quotes and stories for the next couple of days, giving us a refresher course in the uniqueness of Yogi, which is a good thing. Always good for a funny quote, most of his most endearing ones were totally off the cuff, some were seemingly nonsensical, but deep beyond their simplicity.
Some of my favorites include:
“That restaurant is so crowded, nobody goes there”.
“A nickel ain't worth a dime anymore”.
“It ain't over til it's over”.

It's hard to truly argue any of those observations. Another time, while discussing playing the outfield in the World Series during day games, and dealing with the sun, he noticed that it 'gets late early out there”.

There was also the military man, a Navy veteran that was a part of D-Day, serving on the USS Bayfield.

There was the ballplayer, the Yankee catcher and notorious bad ball hitter that earned an unprecedented 10 World Series rings during his playing days. Garnering 3 Most Valuable Player Awards and was named to the All-Century Team by MLB in 1999.
He passed on the 69th anniversary of his major league debut.
There is the man enshrined in Cooperstown, elected in his second year of eligibility in 1972.

There was the family man, who along with is wife Carmen, raised their kids in Montclair, New Jersey, where the Yogi Berra Museum is located. (On the grounds of Montclair State University)
Then there was 1985.

Managing the New York Yankees, who were struggling to say the least, Yogi got a 'vote of confidence' from owner George Steinbrenner, essentially saying that no matter what, Yogi would be his manager for the duration of the 1985 season. That lasted all of sixteen games. Yogi was fired while the team was in Chicago, after the team had lost 6 of its previous 7 games. After his termination, Yogi rode on the team bus to the airport, wished the Yankees well, and caught a plane home, while the Yankees, and new (recycled) manager Billy Martin and the rest of the team flew to Texas.
Yogi vowed that he would never again be a part of the Yankee family, or set foot in Yankee Stadium.
Apart from the Mets, the only other major league jersey that Yogi would wear in his career was the Houston Astros, where he coached for a couple of seasons, mainly as a favor to his neighbor, John McMullen, who owned the team at the time. He coached there for three years before retiring.

There was the man that walked away from his livelihood over an injustice, and held his ground until the offending party apologized, not an easy thing for Yankee owner George Steinbrenner to do. But George came to Yogi,hat in his hand to make amends, and invite Yogi back into the New York Yankee family. That was all it took for Yogi to return. But it took Steinbrenner fourteen years to do it.
So Rest in Peace, Sir. It has been our privilege. 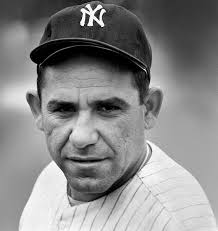 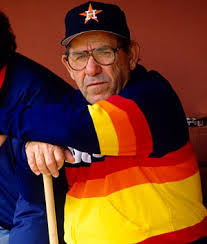 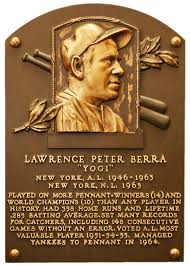 This is a good book about Yogi, and his relationship with the more contemporary Yankees, through Ron Guidry's eyes...a good read for sure. 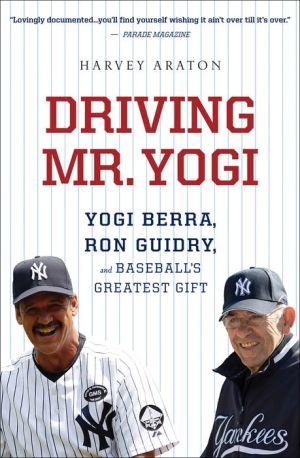 Posted by Baseball Mike at 2:01 AM