!972 was a roller-coaster of a year in the world, both inside and outside of the sports realm. It was the year of the re-election of President Richard Nixon, and the beginning of the unraveling of that presidency, the war in was still ongoing, and airline hijackings were becoming a routine occurrence.
The Munich Summer Olympic Games in late August dominated the sports news, with American Mark Spitz winning 7 medals in swimming that year, but that was overshadowed by the slaughter of 8 Israeli athletes by Arab terrorists in the in September.

In the baseball world, labor strife was  beginning to show itself, resulting in the first ever cancellation of regular season games because of a labor dispute, losing the first week and a half of scheduled games that season, which were never made up. As a result, some teams played less games than other teams. One of the results of this was the Billy Martin led Detroit Tigers winning the AL East title by a half game over the Red Sox, with the Tigers having played 1 more game than . It is safe to say that with an equal amount of games played, the outcome may have been different.
1972 saw the unexpected, untimely passing of former Dodger great, and current Met manager Gil Hodges, who suffered a massive heart attack at the end of Spring Training. he was replaced by Yogi Berra, who piloted the pitching rich team to a third place finish.
For the first time in over seventy years there was no professional baseball played in , , as owner Bob Short moved the franchise to the area, and renamed them the Texas Rangers. Hall of Famer Ted Williams piloted the team to a last place finish. Williams was reportedly miserable in , and resigned at the end of the season.
Willie Mays' career had quickly fallen into a rapidly declining downward spiral, and had become an expendable player in the Giants' outfield, when long time Giants fan, and New York Mets owner Joan Payson arranged to bring the Say Hey Kid back to . Willie was traded to the Mets on May 11th, and made his Mets' debut on the 14th, against those same Giants. Hitting leadoff, and playing fist base, Mays homered in the 5th inning in front of his new hometown crowd at Shea Stadium.
The season's end saw Pirate's legend Roberto Clemente's run towards three thousand hits, trying to become the 11th player to reach that milestone. On September 28th in , against my beloved Mets, and lefty Jon Matlack, Clemente doubled to left center for his three thousandth, and last career hit.
Adding to his legend in the off-season, Clemente chartered a plane in his native Puerto Rico, filled it with emergency relief supplies, and on December 31st, took off for , which had been decimated by an earthquake earlier in the month which killed upwards of 12,000 people.
His plane never arrived. It crashed shortly after takeoff, killing all aboard.

On the playing field, Nolan Ryan debuted with the California Angels, after being traded by the Mets for Jim Fregosi, in what has been widely regarded as one of the most lopsided trades in baseball history...Sparky Anderson led the burgeoning Big Red Machine to the NL West crown, again...the A's won their second of five consecutive AL West crowns.

But there was one phenomenal performance of note...
Lefty, Steve Carlton of the Phillies, who had been traded from the Cardinals before the season started, went 27-10 with a    1.97 ERA for an absolutely terrible Phillies team. won 27 games, and the team won just 59 games. He won 46% of the teams wins. And with not a whole lot of offense to back him up, he pitched 8 shutouts and completed 30 games. (He also batted .197 with 1 homer and 8 RBI)
He endured a 5 game losing streak early in the season, losing 2 of those by 1 run, and 2 others by 2 runs. He also had a stretch of 4 shutouts in 5 games, giving up just 1 run in the non-shutout. So essentially 1 run given up in 45 innings.

So let's see how that matches up. First, we'll look at the , combining the hitters and pitchers... 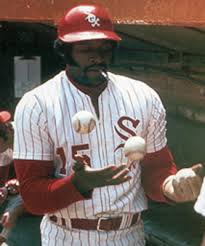 The voters were correct on Dick Allen AND Gaylord Perry for their individual league awards, and would have earned both honors through my system as well. If there was one award to be given as the overall best player in the in 1972, it was easily Dick Allen.
Allen was on with tremendous potential, born ten years too late. He  was born in Wampum, , and was signed by the Philadelphia Phillies in 1960. He spent his first spring training in , where he first encountered segregation in the deep  south.
In 1963, he was assigned to the Phillies minor league affiliate in , and was met with racial hatred like he had never experienced. He was the first African-American player for the team, and the locals apparently arranged protests and parades around his appearance with the team.
He made the major leagues for good in 1964 with the Phillies, and had one of the best rookie seasons ever. Playing in all 162 games, he amassed 201 hits, with 29 homers, 91 RBI and batted .318. The Phillies that year had an epic end of season collapse, and failed to win the pennant, but Allen ran away with the Rookie of the Year award, with 18 of the 20 votes. He also finished 7th in MVP voting.
1965 is where he began a love/hate relationship with the fans. Some of that perceived animosity stems from a batting cage horseplay incident involving Frank Thomas. Thomas, a veteran ballplayer and reportedly somewhat of a bully, was eager to share quite a few disparaging remarks, most of them racial in nature, with the young Allen, leading to a pre-game fistfight in which Thomas flung a bat at Allen, hitting his shoulder. The popular Thomas was sold to the Houston Astros a short time later.
Some of Allen's exploits on the field are legendary in their own right. He cleared the Coke sign at Connie Mack Stadium in with a homerun that went an estimated 529 feet. He hit a line drive so hard, the opposing shortstop jumped to try and reach it, but the ball kept rising. It allegedly only stopped rising when it reached the seats.
The fans in became merciless. Allen, a sensitive man, had endured threats, racial epithets, and other disgraceful abuse, decided to then hurl things at Allen. Showering him with fruit, ice and even radio batteries. He took to wearing his protective batting helmet while fielding his position, which may have egged on the Phillie faithful.
Known late in his career for doing things on his own schedule, he partnered with the late, great Chuck Tanner, who was his manager with the White Sox. Tanner essentially let Dick be Dick. If he wanted to show up 20 minutes before a game, that was fine with Tanner...as long as Allen produced. And produce he did. Winning the MVP in 1972, could have easily won the same award in 1969 (as seen in an earlier post of mine).
The funny thing about Allen and all of the turmoil that was around him, with the exception of the Frank Thomas incident, there were not many other players that had a problem with him. (except maybe opposing pitchers)
Bob Uecker and Mike Schmidt both have talked in various books about what a great teammate he was.
So maybe, soon, may call his name, and he would be VERY deserving of that honor.

Sorry for the digression...

Bench had a very good year, no doubt. And I can understand the hesitance of the voters to vote for a player on a last place team for the MVP award. But the fact is, was by and far the best player in either league and by a long shot. , notorious for not being 'press-friendly'. But the reality is, that 1972 season by is easily one of the top 5 performances ever.