Immediately prior to the 1903 season, the National League pondered its future. With the upstart American League's success in attendance and player poaching, there was talk of a merger between the two leagues which would have resulted in one twelve team league. Instead, a truce was declared, and the two leagues worked together, but still maintained their own identities.
As a way to smooth ruffled feathers, both leagues decided to participate in a Championship Series between the champion of each league. The best-of-nine series featured the Boston Americans faced the Pittsburgh Pirates in the first “World Series”. The Pirates, who lost Ed Doheny late in the season due to a 'mental breakdown' combined with an injury to pitcher Sam Leever, left their pitching thin, as they lost the inaugural series to Boston.
Boston starter Bill Dineen won three games, and Cy Young the other two. Pirated hurler Deacon Phillipe pitched a record five complete games during the series.

Off the field, one of the oddest tragedies befell Washington Senator outfielder Ed Delahanty.
On July 2nd, he was ejected from a train due to drunkenness. Some reports have him brandishing a straight razor and threatening other passengers after 'consuming five whiskeys'.
He attempted to cross the International Bridge, when he either fell, jumped or was pushed off the bridge. It is not known whether he perished due to the fall, or if he drowned. His body was found two weeks after his disappearance.
One of the best hitter of his generation, and one of five Delahanty brothers who played major league baseball, he finished with a career batting average of .346, and just under 2,600 career base hits. At the time of his passing, he was second on the all-time hits list. 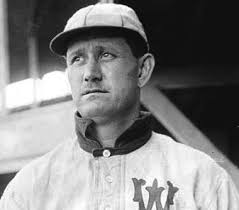 He was inducted to the Hall of Fame in 1945 by the Veteran's Committee.

The Baltimore Orioles team folded, and the franchise was sold and moved to New York, where they began play as the New York Highlanders. Major League baseball would return to Baltimore in 1954. During that lapse, the Baltimore team in the International League flourished, and is said to have had some of the best minor league teams of that era. Remember, babe Ruth got his start playing for his hometown team in 1914. 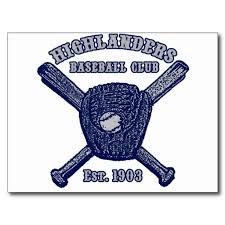 In May, the White Sox committed twelve errors in a game against the Tigers, while the Tigers themselves committed six themselves, in what is referred to as the “18-E Debacle”, which still stands as the most errors in a single game.
Speaking of the Tigers, Outfielder “Wahoo” Sam Crawford led the league in triples with 25, which establishing a record that would stand until 1912. It was his first of a record five triples championships. 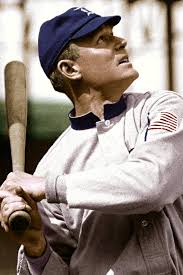 The Cleveland Bluebirds (shortened to Blues) changed their name to the Cleveland Napoleons (shortened to Naps) in honor of their star player, Napoleon Lajoie, who was purchased from the Philadelphia Athletics. Lajoie was originally a Philadelphia Phillie, but jumped to the Athletics for more money during the formation of the American League. Lawsuits and injunctions made it not possible for the Athletics to play Lajoie in Philadelphia, so owner Connie Mack sold Lajoie to Cleveland for a reported $25,000. Lajoie continued to sit out games played in Philadelphia.

In September, Cleveland Naps pitcher Jesse Stovall made his first career start, and pitched an eleven-inning shutout against the Tigers, which remains the longest shutout by a pitcher starting his first game. 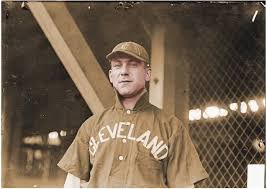 Also for the Naps, Bill Bradley established a still record for third baseman for hitting 22 triples in a season. 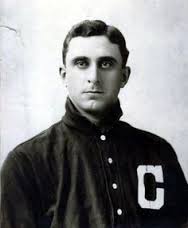 For the Philadelphia Athletics, pitcher Rube Waddell became the first to strike out 300 batters in a season. He would become the first to do so in consecutive seasons, when he established a long standing record of 349 strikeouts in 1904. 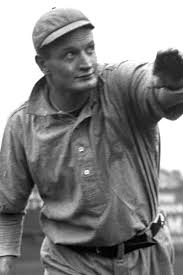 In Chicago, the Orphans became the Cubs. Catcher Johnny Kling set a record for triples hit by a catcher, with 13. Tim McCarver would tie that record in 1966. 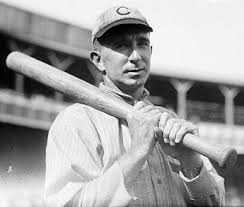 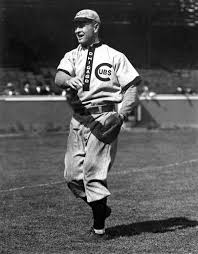 and pitcher Jake Weimer was one of two rookies to win twenty games. 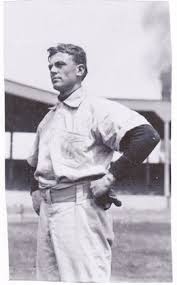 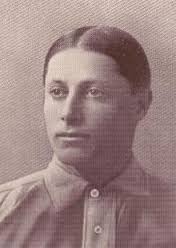 Jimmy Sheckard of Brooklyn hit nine homers to lead the league. His homers accounted for 60% of the team's total. He also established the record for most stolen bases by the home run champ with 67. At the time, Sheckard and Frank Chance established a new record for stolen bases, bested by Bob Bescher in 1910.

For the Cardinals, Homer Smoot hit four home runs. This was exactly half of the Cardinals' eight homers for the season. 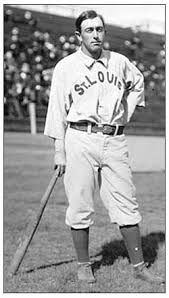 In Pittsburgh, Player-Manager Fred Clarke became the first player in the modern era (1901-) to hit for the cycle twice. 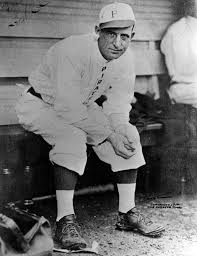 Pitcher Sam Leever became the first National League pitcher to lead the league in ERA with twenty-five or more wins. 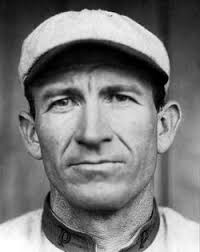 Honus Wagner won his second (of eight) batting titles, and was the first to lead in batting while striking out less than twenty times during the season. He struck out just seventeen times, and in a true case of baseball irony, Wagner struck out to end the World Series. 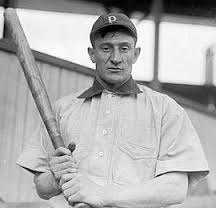 Wagner and Cleveland's Nap Lajoie led their leagues in batting, marking the first time that two right handed batters led each league in that category. 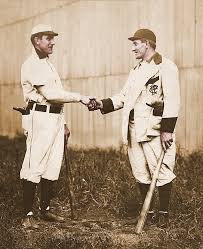 For the Boston Americans (soon to be Red Sox) Buck Freeman was the first in franchise history to hit for the cycle, and to lead the league in home runs. 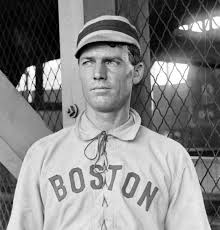 The New York Giants pitching was top notch. They had two thirty-game winners, yet still failed to win the pennant. In fact, Joe McGinnity and Christy Mathewson combined for sixty-one wins, which was 72.6% of the team's eighty-four victories.
The Giants bettered their 1902 season by winning thirty-six more games.
Christy Mathewson began a streak of twelve straight years of winning twenty-two or more games, and established a strikeout record of 267, that lasted until 1961 when Sandy Koufax recorded 269 strikeouts. 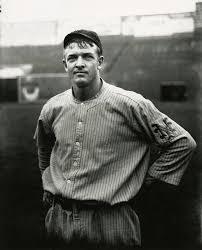 But you can't really talk about the Giants pitching without talking (or raving) about Joe McGinnity.
First, in 1903, he pitched a whopping four hundred and thirty four innings, completing forty-four of his forty eight starts. He is the only pitcher to win thirty games while losing twenty in the same season. He remains the only pitcher to collect complete game wins in both games of a double-header three times in a season. Oh, and he did that within a month. He pitched one hundred innings during the month of August
He was also the second pitcher to steal home plate in a game.

Joe McGinnity pitched just ten years in the major Leagues, where he averaged twenty-five wins, forty-seven starts, thirty-four complete games, and three hundred forty-four innings per year.
Because of his durability, his endurance, work ethic, combined with the fact that he worked in an iron foundry, he earned the nickname “Iron Man”.
Joe played for the aforementioned Baltimore Orioles, when it was a National League team in 1899, only to have that team contracted, and Joe was assigned to Brooklyn, where he pitched in 1900.
In 1901, after contract disputes and player raids from the upstart American League almost led to Joe's retirement, he signed with Baltimore, where he was teammates (again) with John McGraw.
The style of baseball played by McGraw was very aggressive, and led to many altercations during (and often after) games. During one such spat, McGinnity spat on an umpire in a game in Detroit, and was arrested and immediately suspended by AL President Ban Johnson. That suspension would last twelve days, after McGinnity publicly apologized for his actions. John McGraw would soon resign from the Orioles, and sign on to manage the New York Giants.
The Orioles franchise were facing serious financial difficulties, and were actually running the ball-club with a serious debt. As such, they were forced to release several of their players because they were unable to pay their salaries. Joe was released, and signed with the Giants immediately.
Joe owned, played, and managed a few minor and semi-pro teams after his big league career ended. Pitching for the Dubuque Climbers in the Mississippi Valley League at the age of fifty-two, he won fifteen games. One of those was a shutout that lasted one hour and seven minutes.
Because of his nickname, and with John McGraw understanding general showmanship, McGinnity was selected to start in an exhibition game in Birmingham, Alabama, against the Birmingham Iron Men in March of 1904. The game was scheduled to help raise funds to build a Vulcan statue for the Louisiana Purchase Centennial exhibition, which was at the World's fair in St. Louis.
At his behest, Joe was allowed to visit the foundry in downtown Birmingham, and to personally pour some of the iron into the molds for the statue.
That statue is the largest cast-iron statue in the world, and is still standing in Birmingham. 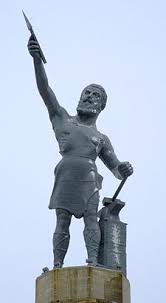 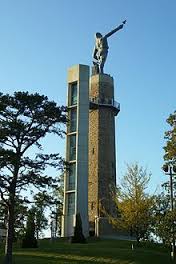 He was elected to the Baseball Hall of Fame in 1946 by the Veteran's Committee. 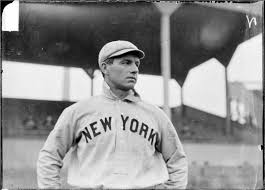 So, on to the season.
The Boston Americans won their pennant handily, beating the second place Philadelphia Athletics by fourteen and a half games. The Pirates won their pennant by six and a half over the Giants.
The Americans won the first World Championship, five games to three. Jimmy Sebring of the Pirates became the first to homer in the World Series, hitting one off of Cy Young.

First, we'll take a look at the American League pitching, which was the most dominant of the four categories that I use for my reference points. They outperformed their National League counterparts by 21.6%.
Again, as with this era, I will use the Runs Allowed factor rather than the Earned Runs Allowed to calculate my statistical rankings, but I will include both numbers in the rankings for your perusal.
First, the initial numbers:

And as compared to their team's average performances, we get:

And now to look at the National League:

Now we'll look at the National League offense, where they had a 15.1% statistical advantage over their American League counterparts. Our initial numbers flesh out this way:

Then as compared to their teams performance, we get:

And the American League offensive leaders begin with :

And as matched to their team performances, we get:

Which brings our top five player rankings in each league to:
American League
Napoleon Lajoie (Player of the Year) 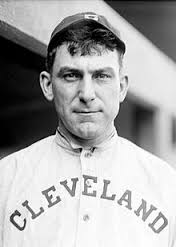 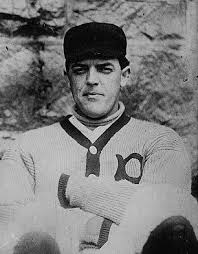 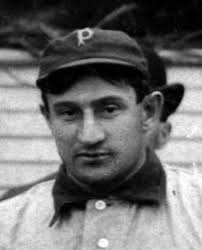 Since there was no post season awards distributed during this era, I will pretend there was. And since I am pretending, the above would have been my vote.