Tyrus Raymond Cobb, a.k.a. The Georgia Peach, was well into his legendary baseball career by the time the 1912 season was played. This would be his sixth full big league season, and he already had won five or six batting titles. I say five or six because of the hi-jinks that occurred at the conclusion of the 1910 season.
While the dispute had been settled quite some time ago, there was a span of several years when no one knew who was the official batting champion in the American League in 1910.
Most baseball fans know how Cobb was not a very popular player during his career. Hated, despised and belligerent were words used to describe Cobb, in both his playing style and his overall demeanor.
Towards the end of the 1910 season, Cobb and Napoleon Lajoie of the Indians were competing for the title, with Cobb in the lead by a few percentage points. Cobb, with the Tigers out of pennant contention, decided to sit out the last couple of games to keep his average atop the league, claiming an issue with his eyes. Cobb figured that the car was his at that point.
The Chalmers Motor Company had announced that they would award to the batting champion, a brand new 'Chalmers 30' car. This was the beginning of the "Chalmers Award" that was to be awarded to the best player in each league. It was decided, also, that no player could win the award more than once. (This was one of the forerunners to the Most Valuable Player Award) That award was issued from 1911-1915 before
Lajoie, who was playing in St. Louis against the Browns, noticed that in his first at bat that the Browns third-baseman was playing deep, and that a bunt might well result in a hit. That third-baseman, rookie Red Corriden, later explained that his manager had instructed him to play deep because a line drive from Lajoie might 'kill him'.
That manager, Jack O'Connor, was a one time teammate of Lajoie.
Lajoie, taking advantage of the defensive alignment, bunted safely six times that day, and also hit another infield single and a triple. He reached base on an error by the Browns' shortstop. According to reports, Browns coach Harry Howell sent a bat boy to the official scorer with the offer of a free suit if he changed the scoring of an error to a hit.
The next day, unofficial final batting averages were published in the newspapers, and some showed Cobb as the champion, some showed Lajoie. In fact, eight members of the Tigers sent congratulatory telegrams to Lajoie. Tigers owner Frank Navin, as did many Cobb supporters, claimed foul, and got A.L. President Ban Johnson involved in the dispute. He found the there 'was nothing dishonest' in their actions, and cleared all parties.
Howell and O'Connor were soon out of baseball, although I'm sure there were other reasons than this scandal. Corriden, a rookie, was absolved and went on to have a nice career.
The Chalmers Motor Company announced that they would award a car to each of the two players.
When the Sporting News came out with the official averages days later, it put the controversy to rest, giving Cobb an average of .385 to Lajoie's .384.

While doing research seventy years later, Sporting News historian discovered that Cobb was actually credited for the same game twice, giving Cobb two less hits than he was credited for in 1910, and in fact giving the batting title to Lajoie. Commissioner Bowie Kuhn agreed to alter Cobb's career hit total, but to not strip him of the batting title.

Cobb's belligerent personality was never more evident than in the 1912 season.
In May of that year, while in New York, Cobb got into a shouting match with a fan at the game. Cobb said later that the same man had taunted him on several occasions. Cobb snapped and went into the stands to attack the fan.
The fan who had lost several fingers in an industrial accident was quickly knocked down by Cobb, who then began kicking and stomping on him, When someone yelled for Cobb to stop because, "He has no hands!"
Cobb replied "I don't care if he has no feet!"

Teammates and police officers were finally able to pull Cobb from the victim, and he was immediately tossed from the game, and immediately suspended indefinitely by Ban Johnson, who happened to be at Hilltop Park to witness the incident.
The rest of the Tigers staged what was the very first player revolt in the American League. They refused to take the field two days later in Philadelphia in support of Cobb. The Tigers scrambled to field a team, rather than forfeit the game, and stocked the roster with a variety of semi-pro players that were available. (The Tigers would have faced a $5,000 fine if they were forced to forfeit)
Manager Hughie Jennings (who would play in this game, along with two of his coaches), with the help of a Philadelphia sportswriter, was able to round up a collection of neighborhood players.                  Relying on Allan Travers, a seminary student and the promise of $25 for the game, the Tigers were able to take the field in what would be an historic feat.

Travers, an outfielder by 'trade' discovered that the pitcher would earn $50, so he took the mound, and the loss in a 24-2 drubbing.
As a curiosity, one of the players recruited by Travers was former boxer Billy Maharg, who would be a key conspirator in the 1919 Chicago Black Sox scandal a few years later. Maharg would lose a few teeth on a ground ball at third base.
The Tigers owner petitioned Johnson to cancel any upcoming games until the strike was settled, but Johnson disagreed. Eventually, Cobb did ask his teammates to end the strike and resume play, which they did. The striking players were fined $100 each. Cobb was fined $50, but suspended for 10 games.

Travers went back to the seminary, after his only big league appearance on that May afternoon. He completed his studies, and became a Jesuit priest, becoming the only priest to play in the major leagues. He would become a teacher at St. Francis Xavier High School in Manhattan, and would later become the Dean on Men at St. Joseph College in Philadelphia. 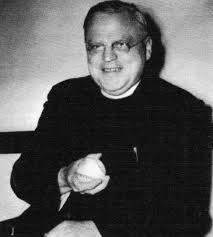 But, back to Cobb.
Then there was another incident in 1912 where three men attacked Cobb while he was driving with his wife in Detroit, in August of that year. Accounts vary as to what took place from this point on. One thing that is known is that one of the man did slash Cobb across the back with a knife. The rest of the story changes, ranging from Cobb pistol whipping one of the assailants, to Cobb killing one of the attackers. (This latter account was allegedly told to biographer Al Stump, but has never been able to be verified)

Can you imagine if this happened in today's world, with 24-hour news cycles, and the preponderance of cell-phone cameras and social media? These incidents would be replayed on all the news programs, or the sports highlight shows, over and over.
Instead, with the technology of the day in 1912, it would take days or weeks for these stories to become widely known.

All this turmoil does not take away from the fact that Cobb had a phenomenal season, hitting .409 (or.410, depending on the source) for the sixth place Tigers. It was Cobb's second consecutive .400 season. 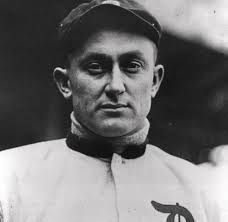 Also in 1912:
Fenway Park opened in Boston...
Hugh Bradley of the Red Sox becomes the first to homer over the Green Monster at Fenway, his only home run of the season. He would hit just one more in a five year major league career...
Navin Field (later Tiger Stadium) opened in Detroit...
Crosley Field opened in Cincinnati...
The New York Highlanders (soon to be Yankees) took the field wearing pinstriped jerseys for the first time...
Rube Marquard won 19 games in a row...
J. Owen “Chief” Wilson hits 36 triples, a record which still stands, and is one that will never be broken, in my opinion.
Smoky Joe Wood and Walter Johnson each topped 30 wins; Wood with 34 and Johnson with 33...
The Boston Red Sox won the World Series over the New York Giants, 4 games to 3. One game resulted in a tie. This marks the first time the World Series was decided in the last inning of the final game. 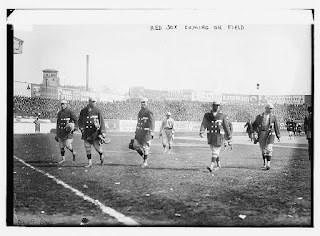 On to the season at hand. There were six teams that won 90 or more games, three in each league. The Giants paced the National League, winning 103. And The Red Sox won 105 to claim the American League pennant.
The team rankings for 1912 were:

We'll analyze the National League pitching first, showing the raw rankings first, and instead or ERA, I will show Runs Allowed, again as the defensive tools were fairly primitive still:

And against their teams averages, we get this list:
And that gets us to our top performers for the season:

The pitching in the Senior Circuit was a little more consistent, but the Junior Circuit had some stand out performances. Statistically speaking, the AL had a 0.29% better ranking than the NL. We'll get into the hitting portion in a moment.
As I mentioned earlier, there were two 30-game winners in the AL, and the following list is very top-heavy with great performances.
Our raw rankings in the AL are:
And against their team's average performances:

And this brings us to the top performers list in the American League:

Now, we'll take a look at the offense. In this realm, the National League hitters performed at a clip that was 5.68% better than in the American League.

Our initial performance numbers in the NL are:

And then comparing against team performances, we get this:

Which gets us to our leaders:

And then the American League raw numbers are:

This was the second year of the “Chalmers Award”, which was voted on and awarded to the best player in each league. The award didn't generate as much publicity for the Chalmers Motor Company, so it was discontinued after the 1914 season.
I discussed earlier on the Chalmers company giving a car to Cobb and Lajoie after the 1910 season. In 1911, the winners were Ty Cobb and Frank Schulte of the Cubs.
In 1912, the top five in voting for the award went as follows:

Again, while the hitters were a little more dominant in the National League, the pitching performances of Christy Mathewson was just a bit more dominant.


Heinie Zimmerman of the Cubs had a great season, even if he is one of the forgotten players of that era. 1912 would be his best season by far. He drove in 100 runs only one other time, and although he finished with a .295 career average, he never led the league in batting again. 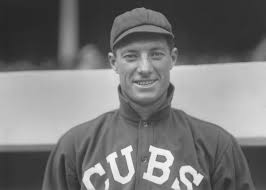 Posted by Baseball Mike at 7:27 AM