1986 and the Dynasty that never was

In the history of the National League, only four teams have won 108 or more games in a season. The Mets in '86, The Reds in '75, the Pirates in 1909 and the Cubs in 1906. (The Cubs and Pirates both did it in less games, and the Cubs won 116 and lost only 36.)
The Mets dominated that year, winning their division pretty easily,  21 1/2 games ahead of the Phillies, who were led by future Hall of Famer and MVP Mike Schmidt.
In the Western Division, the Astros were riding the arm of Mike Scott and his new found dominance of his split-fingered fastball. Although some did say (and some still do) that there was some help from a scuff  or two along the way, Scott remains the only pitcher to pitch a no-hitter in his teams clinching game.
Scott was joined on the Astros staff by lefties Bob Knepper and Jim Deshaies, and righty Nolan Ryan. Yes, Ryan was the second of the two hard throwing righties on the staff. They also had workhorse Charley Kerfeld and workman like Dave Smith coming out of the bullpen. They compiled a composite ERA of 3.51 to lead the National League.
Right on their heels were the New York Mets, led by Doc Gooden coming off of his Cy Young year in 1985. Their staff included Ron Darling, Sid Fernandez, Rick Aguilera and Bobby Ojeda. They had the lefty-righty duo of Jesse Orosco and Roger "Skeeter" McDowell out of the pen. McDowell, it should be noted, won fourteen games out of the bullpen, and almost unheard of statistic in today's game.


The Mets of that era were dominant, yes, but they had the misfortune of going up against 'lightning in a bottle' teams. In 1984, as the Mets' run was beginning, Rookie manager Davey Johnson and Rookie of the Year pitcher Dwight Gooden led the team to their first ninety win season since the Miracle Mets of 1969. They lost the division to the Cubs, who won ninety-six games, and earned their first post-season berth since 1945 (the Year of the Billy Goat).
In 1985, the Mets won ninety-eight games, but Whitey Herzog's Cardinals beat them by three games, winning one hundred and one games, on their way to a World Series win over the Kansas City Royals.
1987, a Mets season that was derailed by a drug suspension for Dwight Gooden, they won ninety-two games to the Cardinals' ninety-five. (The Cardinals would lose to the Twins in the Fall Classic.)
1988 brings the Mets their fourth division title, winning a hundred games for the third time in franchise history, only to be upset by Tommy LaSorda and the Dodgers in the playoffs, as the Dodger rolled on to beat the heavily favored Oakland A's in that World Series.
1989, and the winning continued for teh Mets, but not winning enough to visit October baseball. They slipped to eighty-seven wins, finishing behind the Cubs with ninety-three. The Cubs would fall to the Giants in the Earthquake Series of '89.
1990's performance, or the mediocrity therein, cost Davey Johnson his job halfway through the season. They improved to ninety-one wins, but they were beaten by the youngsters in , Bonilla and Bonds, who won ninety-five to earn their first playoff appearance since 1975.

So timing, aging veterans and the excesses of some, combined with general attrition via trades and Free Agency took the wind out of the sails for the Mets of that time. They fought, brawled, carried on as boys will do. But they also won.

We all know about what happened in that post season, in both leagues, the Championship Series were both incredible, including the epic NL Game Six in the Astrodome. The home run that Donnie Moore allowed in the AL Series, which would haunt him until his last breath. The rollercoaster Fall Classic with the improbable ending of THAT Game Six, with the infamous ground ball to first.
A slight digression here, amongst all the other digressions on these pages...Bill Buckner was not the biggest culprit on that October evening. In fact, if there hadn't been the wild pitch earlier in Mookie Wilson's at bat, Ray Knight would have been on first base, with Buckner maybe holding him on, when Mookie hit the thousand bouncer in his direction. Even if Buckner flubbed that ball, there was no way Knight would have scored, or even tried to score. So yes, it was easy to point the finger at Buckner, but Bob Stanley should also be mentioned equally, if not more so.
And since we're on digressions, and as I have mentioned that I am a Mets fan, I would be remiss if I didn't recall the fact that in June, 1985, the Mets were trounced by the Phillies 26-7. What stands out in that game is the record set by Mets pitchers, the first time two different pitchers allowed ten or more runs in the same game. (Calvin Schiraldi and Joe Sambito)
Fast forward to 1986, and two member of the Boston Red Sox bullpen were Schiraldi and Sambito.  Schiraldi was actually the losing pitcher in Game Six.

Interesting that the voters went with Michael Jack Schmidt, giving him his third MVP Award, during a year where the pitching seemed to outpace the hitters, especially Mike Scott's performance.
Or did it?
Scott went 18-10 with a 2.22 ERA, striking out 306, 64 more than the second place finisher in K's.
Valenzuela was 21-11 with a 3.14 ERA.
Mike "The Polish Prince" Krukow was 20-3 with a 3.05 ERA.
Scott and Bob Knepper each had 5 shutouts.
Bobby Ojeda was 18-5 with a 2.57 ERA and led the league with a .783 winning percentage.

As you can see, some stark differences between the voting and my performance evaluations. (On the offensive chart, please note that Hubie Brooks of the Expos ranked 2nd, but didn't have enough at-bats to qualify for league titles)
Combining the numbers, to come up with one clear cut candidate for the best all around player in the league, the top 5 rank as so:
Carter
Schmidt
Hayes
Scott
Ojeda 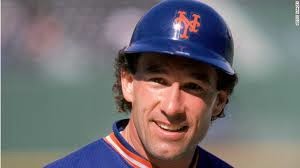 And your Most Valuable Player: 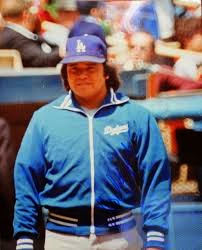 It's now available, and has been receiving incredible reviews from coast to coast, remember you read about it here first:

Posted by Baseball Mike at 6:25 PM