(if you'll indulge me)

My mother passed away on July 3rd. She had been fighting cancer over the previous 18 months. She fought as bravely and as proudly as she could. But then she caught COVID, and was not able to recover.

My family and I did not visit her at all in 2019, because of the fear we had of exposing her to the virus. I did not get to see her after I had a stroke in January, 2019. But we talked often. At least once a week.

She came from Ireland as a teenager, looking for a better life and opportunity for herself. The oldest child, she made New York her home, but was never too far from her sisters and brother. She would return home to Ireland when fortunes allowed, and my brother and I were able to spend time with these family members whom we may have otherwise have heard of in name only.

She was a determined woman. She left a job with the Telephone Company to raise her two boys. She and my dad studied hard to become proud American citizens, immediately volunteering to work for the elections board for the 1972 primaries and general elections. Both of my parents instilled in us the importance of our vote, and encouraged us to use that power.

We moved from The Bronx to Queens in 1973, when my parents bought a house. Once my brother was in school, she began to take night courses to earn her GED, which she did. Then she got a job as a teller in a local bank. Beginning as a part-time teller, she worked her way up the ladder. Full-time teller, Administrative Assistant, Assistant Branch Manager, Branch Manager and finally Executive Vice President.

Along the way, she became involved with many business and charitable organizations. A local Business Improvement District, al local Block Association, the local Boys and Girls Club, the Rotary Club. During her time with the Rotary, she became one of the first female chapter Presidents in its history, an honor she proudly displayed, visiting with a Rotary Club in Listowel, County Kerry in Ireland.

She retired after twenty plus years of service to her original bank, but was coaxed out of retirement by a local group wishing to start a new banking enterprise. She helped form and found that bank, coming on board as the original branch manager and Executive Vice President. She was asked to rejoin the Business Improvement District organization as a senior advisor, a role which she cherished in her final days.

Her persona loomed large over our neighborhood. At her wake, the local parish priest said a few words. Saying that while he did not know my mother personally, their church secretary worked for my mother at one of the banks. The funeral director knew my mother. Everyone knew my mother.

She had a rich life. She got to meet, and know, many politicians, local and national. She was named to be a Deputy Grand Marshall of the Rockaway St. Patrick's Day Parade in 2006. She was on a first name basis with Senator Charles Schumer, Mayor Michael Blomberg and Mayor Rudy Giuliani.

At the wake, there were so many people that I had never met, who came to pay their respects. I also received over 200 emails, texts and messages from friends, neighbors and relatives who would not be able to make the services. My brother received at least that much.

Her passing hit me very hard.

My family and I were able to finally visit this past June. We spent a week in New York at her house. Visiting, playing cards, telling stories and just eating.

My brother had become a caretaker of sorts, taking her for her cancer treatments and follow-up doctor visits. But he got the week off. I took her for what would be her final chemo treatment. After all she had been through, and watching how badly my father suffered in his final days, it did my heart good to see her make appointments for her next round of treatments that would have carried her through to December.

On our second full day in New York in June, we went on a small adventure, one that I had been kicking around for a year or so. Partnering with my daughter, I mentioned that Jackie Robinson's grave was located in a cemetery in the neighborhood, and that maybe we should try to visit. She seemed surprisingly intrigued, and we put it on our tentative schedule.

The night before, my friend David asked what plans we had for the Sunday, and I told him that I had planned to find Jackie's gravesite, and he asked if he could tag along. He was welcome to do so. We had grown up there, and I went to school essentially right in front of the site, but never knew he was there.

That morning, I visited a store to find a memento to leave for Jackie. Something simple.

We got to the cemetery, and it took about twenty minutes of winding and searching, but we did find it, in a quaint spot somewhat looking over what was the Interboro Parkway, but renamed the Jackie Robinson Parkway.

At his grave, there were many souveneirs. Dozens of baseballs, a couple of bats, a Dodger's cap, some notes and some coins. I placed mine gingerly, and it seemed appropriate. A small American Flag for an Army veteran, and American hero.

The four of us (My wife and Daughter, Dave and myself) stood quietly and somberly for a few moments. then we quietly left. 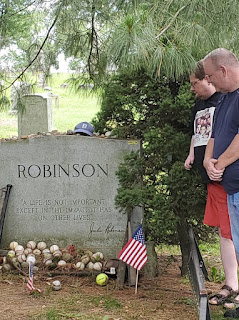 As we were in the funeral home, receiving family and friends, noting the flowers sent along with the messages something occurred to me. We were a block away from the Boys and Girls Club. the funeral director was sharing stories of our mother with us. Business people were coming after work to say their good-byes to her.

Was it divine intervention, or cosmic karma, or just a coincidence that we visited Jackie's grave three weeks prior?

On Jackie Robinson's headstone, there was a quote:

"A life is not important except in the impact it has on other lives." 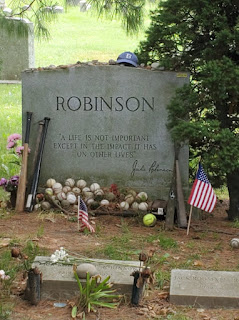 Posted by Baseball Mike at 6:55 PM