The 1959 baseball season had some very big highlights, and some lowlights as well.

The Los Angeles Dodgers were the ultimate winners of a very tight pennant race and had to win a best of three playoff series over the Braves to keep Milwaukee from its third straight pennant, and to bring the West Coast its first taste of post-season baseball. (They won it in two games)
The pitching rich Dodgers faced the equally pitching rich Chicago White Sox in the Fall Classic. The “Go-Go Sox” won the pennant by five games over Cleveland. The Sox combined to steal one hundred thirteen bases, forty-five more than the runner-up Boston Red Sox.
From 1949 through 1960, the Yankees won the American League pennant in every season but two. 1954 and 1959. Manager Casey Stengel won ten of twelve pennants. Al Lopez, manager of the 1959 White Sox also managed the 1954 Cleveland Indians, the only other manager to win an AL pennant during that time period. 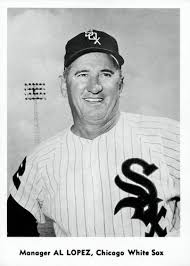 The Sox destroyed the Dodgers in the first game of the Series, winning 11-0. The Dodgers rallied back to take the second game, by a 4-3 score. The Dodgers won the first two World Series games played in California, taking a three-games to one advantage, but the Sox won the elimination game, 1-0, to send the Series back to Chicago. The Dodgers won the sixth and final game by a score of 9-3.
Interesting to note that both teams hit for a .261 average in the Fall Classic, and the Dodgers 3.23 Earned Run Average was just a shade better than the Sox’ 3.46. So, all in all, both teams were evenly matched.
This was the first World Series in which there were no complete games.
But the power rankings tell a slightly different story. On paper, the top five overall teams were:

The further breakdown of team performances, beginning with pitching, were:

And then in offense:

There was a small gambling scandal in the major leagues, and a bigger one in the minors.
In Philadelphia, Panamanian born pitcher Humberto Robinson was approached by a known gambler named Harold Friedman. Friedman was alleged to have offered Robinson $1,500 to purposely lose a game against the Cincinnati Reds. Robinson, a quiet man, never accepted or even acknowledged the offer, but did mention in in secret to a teammate, who insisted that Robinson inform manager Eddie Sawyer of the offer, but he never did. 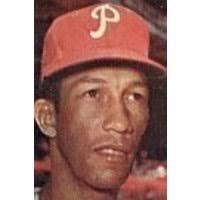 During the game in question, the teammate told Sawyer about the incident. Sawyer didn’t act on that information initially, because Robinson was pitching very well, limiting the Reds to just three hits, hitting a double and scoring the first run of the game himself. He earned the win.
When word got out, Humberto received congratulations and adulations from around the game, including one from Commissioner Ford Frick, for his actions on reporting the bribe attempt.
Friedman was later indicted and ultimately sentenced to a two to five-year sentence for ‘bribery of an athletic contest’.
Friedman was also implicated by a young woman, whose name I won’t divulge, who alleged that Friedman introduced her to three ‘very prominent’ baseball players (who were never named) for the purposes of prostitution. Or that Friedman was charged with several vice counts.

The more serious scandal happened in the minor leagues and involved players on the Chattanooga Lookouts of the Southern Association.
An allegation was made against players Waldo Gonzalez and Jesse Levan. Gonzalez was alleged to be tipping pitches and signals to players and coaches of the Mobile Bears, while Levan was acting as the liaison between the players and the gamblers. Both players were suspended immediately pending a further investigation. 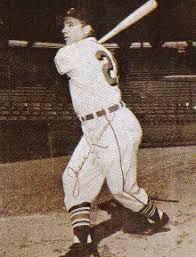 For his part in not reporting a bribery attempt, the National Association of Baseball President Charles Hurth suspended Gonzalez for a year.
As for Jesse Levan, the investigation uncovered a strange scheme that he was also involved in. It had to do with foul balls, where gamblers in the stands would make wagers with patrons as to the next ball being hit foul or not. Somehow, one party was tipping the other party as to which ball would or should be foul. I know it sounds confusing, and implausible, but this was what the investigation turned up. 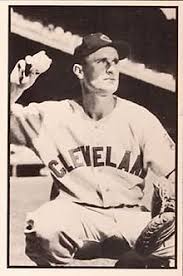 For his part in that scheme, Jesse Levan and former American League catcher Joe Tipton each were barred for life from ever working for any professional baseball team, in any capacity. (Tipton was a part of the Chattanooga team in 1957, and was found to have been offered money in exchange for information and/or performance issues that may affect the outcome of the games)

While we’re talking about the minors, outfielder Frank Howard, of the Victoria Rosebuds of the Texas League, hit a home run in 3 straight innings against the Austin Senators. That, combined with hitting .356 with 22 homers and 79 RBI in 63 games, earned him a brief call-up to Los Angeles, and then reassignment to the Spokane Indians of the Pacific Coast League. 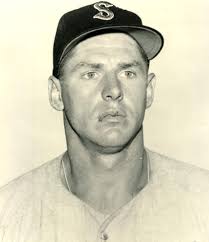 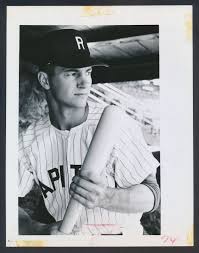 Back to the major leagues.
The Yankee’s collapse was shocking. On May 20th, after a loss to the Detroit Tigers, the Bronx Bombers fell into last place for the first time since May 23rd, 1940. They were able to rally to a third-place finish.
Mediocre pitching, an early season slump, and age contributed to their shortcomings.
Mickey Mantle did steal twenty-one bases, which is the most stolen bases in a season by a player managed by Casey Stengel. 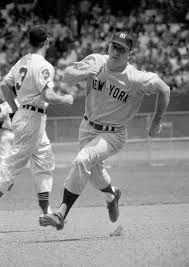 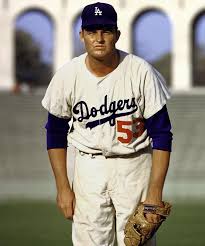 The Chicago White Sox scored eleven runs in an inning against the Kansas City A’s. With the help of ten (yes, ten) walks, three errors and one hit batsman, the Sox needed just one hit that inning.
Second baseman Nellie Fox went on a streak from July 27, 1954 and June 25, 1959 where he collected more hit by pitch than he did strikeouts. 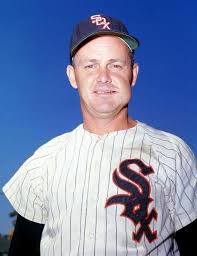 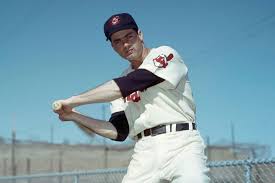 Tito Francona batted .363 but fell one at bat short of the requirement to qualify for the batting title. Harvey Kuenn eon the title with a .353 average. Under modern rues, a phantom hitless at-bat would have been added to Francona’s totals, and he would have won the title. 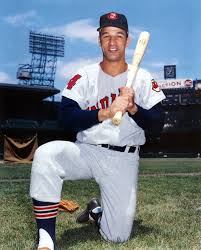 In Boston, the Red Sox were the last team to break the color barrier, with switch-hitting infielder Elijah “Pumpsie” Green appeared in fifty games for Boston. Detroit ace Jim Bunning became just the fifth American League pitcher to strike out the side on nine pitches. He joined Rube Waddell, Sloppy Thurston, Lefty Grove (who did it twice) and Billy Hoeft. 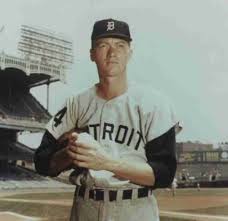 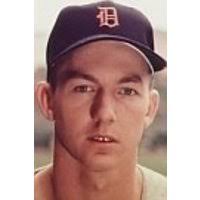 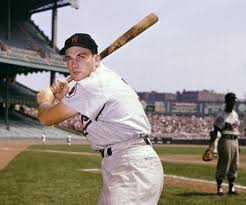 Chicago Cubs shortstop Ernie Banks, on his way to a repeat Most Valuable Player award, became the first shortstop to lead the National league in home runs, and the only NL shortstop to win consecutive home run titles. 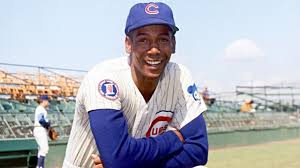 The San Francisco Giants had their second consecutive Rookie of the Year winner with Willie McCovey. Orlando Cepeda had won the previous season. 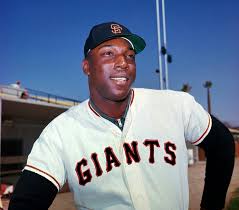 Philadelphia Phillies second baseman George “Sparky” Anderson collected 119 total bases, for a slugging percentage of .249. His 119 total bases remain the record for the lowest by a player with 500 or more at-bats. 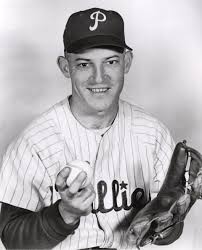 Milwaukee’s Henry Aaron reached four hundred total bases, the most by a player in the decade. He led the league in total bases five of the previous six seasons.
He hit three home runs in a game against the San Francisco Giants, the only time that the one-time home run king hit three homers in a game. 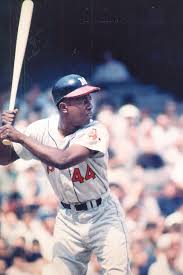 Perfection as achieved, then lost in Pittsburgh. Twice.
We know that Harvey Haddix pitched twelve perfect innings in Milwaukee against the Braves. Then in the bottom of the thirteenth, Felix Mantilla reached on an error by Bucs third-baseman Don Hoak. After Eddie Mathews sacrificed Mantilla to second, the Pirates intentionally walked Henry Aaron and Haddix pitched to slugger Joe Adcock.
Adcock hit the ball over the fence for what should have been a home run, but Aaron, seeing Mantilla cross the plate for the win, stopped running. Adcock passed Aaron, and was technically called out, even though the game was over. The official scoring credits Adcock with a double.
While his twelve straight perfect innings remain the single game record, because he did not win the game, Haddix is not credited with a perfect game. 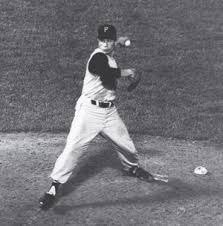 His teammate Elroy Face accumulated seventeen straight wins, which if you go back to the previous season, stretches to nineteen, before losing a decision to the Dodgers in the opener of a September 11th doubleheader. He would win once more to finish with a record of 18-1, with ten saves. 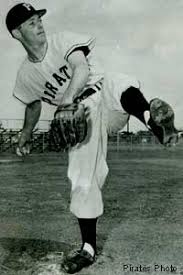 He still holds the record for the highest winning percentage in a season (fifteen or more decisions) at .947.

On to the season analysis, starting with the National league pitchers. Our initial list of top ten performers is:


Then comparing to their teams, we get this next list

That brings our top NL pitchers of 1959 to this surprising list. Including their post-season rankings.:

Over to the American League, where their hurlers averaged out to a 3.6% statistical advantage, we get this initial list:

Then, against their team performances, we get this list:

And that brings us to this, also surprising, list of top AL pitchers:

Bear in mind that there was only one Cy Young Award given at this time, and it was awarded to Early Wynn. Only three pitchers earned votes: Wynn, Sam Jones and Bob Shaw.

Now, on to the offensive side, where the hitters across both leagues seemed to stagnate somewhat. Ted Williams and Stan Musial each endured their worst seasons in their lengthy careers. The offense of both leagues was statistically 3.4% lower than the pitching, and the National league hitters averaged 1.5% higher than the American League.
Starting with the national League, our initial top ten list is:

Then, compared to their team’s averages, we get this list:

That brings our final ranking of top National League offensive players to this:

Comparing the players to their team’s offensive output, we get this list:
This brings us to our top ten (eleven) American League offensive player for 1959:

With all this data, and with pitchers having the overall advantage over the hitters, my top five players in each league are still the hitters 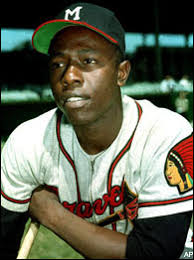 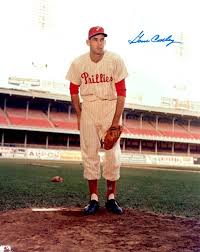 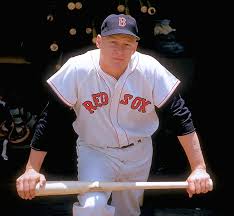 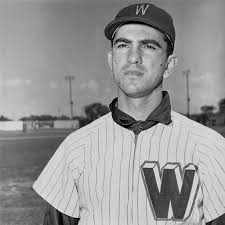