1927, Murderers and Poisons
(Note this article revisits an earlier post, which looked only
at the American League season.
I will highlight in blue text what remains from the original)

In the 1927 real world, that being the world outside of baseball, there were several significant historical events of note. Some of those events include:

But on to the diamond we go...

As baseball continued to distance itself from the 'dead-ball era', the offensive numbers also continued to grow exponentially. Really, from the 1921 season through to the war, the hitters far outpaced the pitchers. And the 1927 season bears that out as well, but more on that a bit later.
As with every season, there was plenty of change afoot, none more so than in Philadelphia. The Athletics were an eclectic mix of talent, youngsters like Al Simmons and Mickey Cochrane teamed with two very impressive forty year-olds, in Eddie Collins and Ty Cobb.
Cobb, who was forced to 'retire' from the Detroit organization over gambling allegations involving himself, Tris Speaker and Joe Wood, found employment with Connie Mack's ball club.
When the 1927 season was said and done, Cobb wound up with the highest season batting average for a forty year old (.357) and Eddie Collins tallied the fourth highest average (.338). Cobb became the first to homer before his twentieth birthday, and after his fortieth. It would be more than fifty years before that was done again. (Rusty Staub was the next to do it, and Alex Rodriguez is the only other to complete that feat) 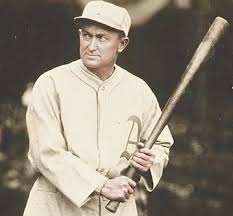 The Georgia Peach also became the founding member of the exclusive four thousand hit club, gaining entry on July 18th, against his former Detroit teammates.
A's pitcher lefty Grove won twenty games, his first of seven consecutive twenty win seasons. The powerful A's would finish in second place, nineteen games behind what has been described as the greatest ball club in history, the Yankees.
But more on them in a moment. 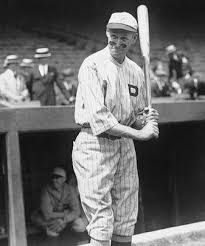 In Cincinnati, pitcher Red Lucas established a National League record for hits by a pitcher with 47. 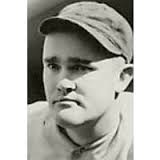 In Chicago, White Sox pitcher Ted Lyons became the third American league pitcher to lead the league in wins while on a losing team. 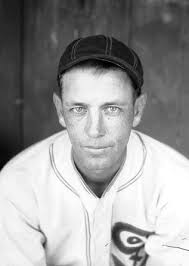 The Cubs became the first National League team to reach the one million mark in attendance. On May 30th, Cubs shortstop Jimmy Cooney grabbed a line drive off the bat of Pittsburgh's Paul Waner and turned it into an unassisted triple play, the rarest of all defensive gems. 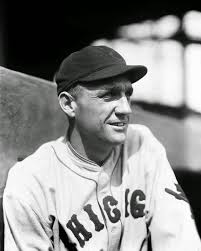 The next day, Detroit Tiger first baseman Johnny Neun snagged a liner off the bat of Indian hitter Homer Summa, and turned that into an unassisted triple play. It remains the only instance of unassisted triple plays happening on consecutive days, and Neun is only the second first-baseman to pull off this feat. (George Burns did it in 1923)
Neun, who only played in seventy-nine games that year, also has the distinction of stealing home during both games of a doubleheader. 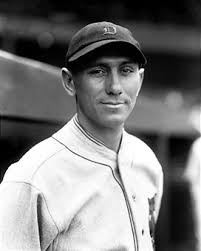 Tiger shortstop Jackie Tavener stole second, third and home in the same inning in a game, which was common during this era. He would do it again the following season, and then there wouldn't be another American Leaguer to accomplish the feat until 1941. 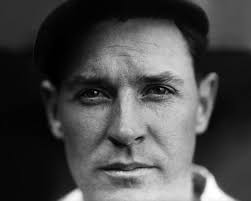 Now, on to the poison. Or poisons as the case may be. Namely Big Poison and Little Poison. The Waner brothers in Pittsburgh, in their first season playing together. Little brother Lloyd (Little Poison) joining older brother Paul (Big Poison) in the outfield for the Pirates.
Between 1927 and 1929, the Waner brothers would be responsible for an incredible26.9% of the Pirates base hits. 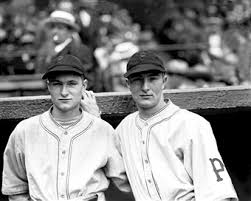 Twenty-one year old Lloyd set the National League record with 198 singles. He was the first rookie player in the NL to reach 200 hits, the first of three straight 200-hit seasons) and holds the second highest batting average by a National League rookie.
Big brother Paul holds a freak statistical distinction. He is one of four players whose career batting average is identical to his career World Series batting average. He played in just one Series, but amassed a .333 average, the same number as he accomplished in his Hall of Fame, three-thousand hit, twenty year career.

(In case you were wondering, the other three are Duffy Lewis, Phil Linz and Danny Murphy)

But the story of the 1927 baseball season starts and ends in the Bronx.

The Bronx Bombers, playing in 'The House That Ruth Built' are one of the most legendary teams in baseball history. Led by Babe Ruth, and his then record setting sixty home runs. Babe hit more home runs that year than any other team did.
George Herman Ruth was THE GUY. His exploits on and off the field were legendary. He transcended the game, and was entrenched in the culture of America like no other before or since. There have been so many pieces written about The Babe, and his saving the game of baseball, bringing a new approach to offensive, hypnotizing the fans with his prodigious home runs. 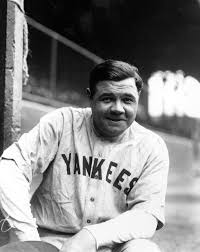 But the Babe had help. First-baseman “Larrupin' Lou” Gehrig hit 47 homers, which was second to Ruth, and bested only by Detroit, Philadelphia and St. Louis. In fact, Ruth and Gehrig combined for 107 homers, while the Senators, Indians, White Sox and Red Sox combined for just 119. 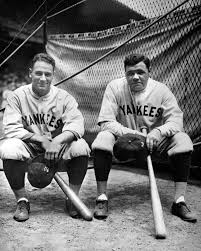 Babe Ruth established a new home run record, one of the most revered numbers in baseball, with sixty. Later broken by Roger Maris, who may be forgotten, but Maris to this day holds the American League record for homers in a season.
He also reached the 50 home run/.350 average plateau for the third time. On September 4th, Babe established the four hundred home run club, just as he did the two hundred and three hundred previously. Ruth and Gehrig remain the only teammates to tally four hundred total bases in the same season.
Speaking of Gehrig, he became the first player, who was not named Ruth, to total 40 homes and 200 hits in a season. Ruth accomplished that three times, Gehrig did it five times. Only Alex Rodriguez has accomplished it more than once.
Gehrig also established a still standing record for total bases for a first-baseman. 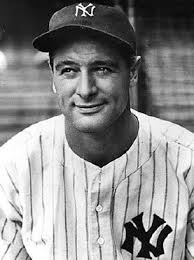 The Yankees swept into the Series, and by a many accounts, won the Series with their first batting practice before the first game. The Pirate players stood in the dugout ans watched in awe as the Murderer's Row lineup blasted the balls all over Forbes Field, which was a noted hitters ballpark.
The Pirates struggled all Series, managing just the runs in the four games, as the Yankees swept the Series. The Yankees became the first American League team to sweep a World Series. 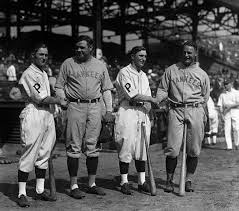 Then comparing the pitcher to their team's performances, we get this top ten list:

Now over to the American League pitchers. The top initial rankings were:

The overall top pitching team performances, across both leagues, were:
Yankees
Cardinals
Pirates
A's
Giants
Now, we'll move to the National League batters., saving the best for last. Six Hall of Famers grace this initial list of top performers, with the Runs Created per Game added:

Comparing to team averages, we get this top ten list:

Now, to the very impressive American league offensive lists. First off, in looking at the basic baseball stats, Ruth and Gehrig have the most impressive numbers, and this ranking reflects that...

Four of that top ten played for the Yankees that year, and eight are enshrined in Cooperstown.
Comparing how the players did against their own team's average, remembering that the Yankees had the obscenely high team number, as well as four players on the top ten list, we get this list:

Simmons, was twenty-five year old, four year major league veteran who played a majority of his career with Philadelphia. Often overshadowed by the exploits of Ruth and Gehrig, he had a pretty substantial career, finishing with a lifetime .334 batting average. And the 1927 season is proof of that overshadowing.
“Bucketfoot Al” was Born Aloisius Szymanski, and had a pretty substantial career in his own right. Simmons played for twenty years, finishing with a career slash line of 307/1828/.334. He held the American league record for career hits (2,927) until Al Kaline bested that in 1974. 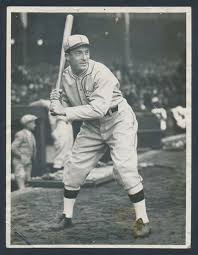 In a totally obscure fact, Simmons holds the record for the most hits made by someone born in the state of Wisconsin. And was the first player in the twentieth century to make six hundred hits over his first three big league seasons. He and Chuck Klein were the second and third players to reach 200 hits in five straight seasons. (They both began their streak in 1929)

Sorry for another digression, but a little clarification is needed here. According to 'baseball-reference.com', which cites Bill Deane's Award Voting, there was a league MVP Award just called "The League Award" given during this era. But there are some issues that arose. Firstly, a player could only win one MVP award during his career, so Babe Ruth having won the award in 1923, was ineligible for the award. Secondly player managers were also ineligible. That award was given yearly from 1922-1928 in the American League, and 1924-1929 in the National League.
These League Awards were forerunners of today's MVP Awards, but the voting appears to be similar, and the voting results are available on the internet.

So, with all of the hoopla around the Babe and his historic home run totals, statistically speaking, he wasn't even the best player on his own team. That distinction belonged to Columbia Lou, Mr. Gehrig. 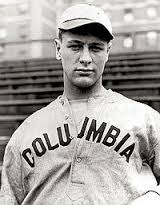 With hindsight, and poetic license, I will put forthwith my hypothetical post season award winners:
National League Player of the Year: 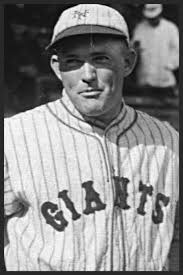 National League Pitcher of the Year: 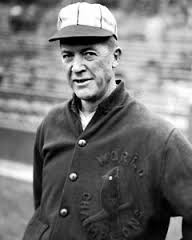 American League Player of the Year: 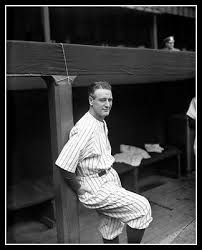 American League Pitcher of the Year: 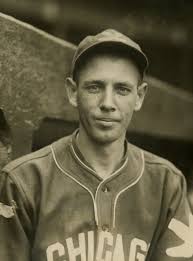 Posted by Baseball Mike at 6:12 AM