Historic performances abound, some good some bad and some intriguing.

One of the things that piqued my interest were the two Georges. You know one of them, and might/should know the other. Both share the middle initial of H; both batted left-handed, both were known for their hitting prowess, and had batting records that stretched into the twenty-first century.      Incredibly, both were also excellent pitchers. Both were very young during the 1916 season. Both would be used on the field to take advantage of their hitting prowess before very long, and both would become Hall of Famers.
Both also faced Walter Johnson during the 1916 season, and both of them fared the same; they both beat “The Big Train” by a 1-0 score.

Now I have taken a little liberty here, in that one of the Georges only started three games as pitcher this season, earning his only win in the game against Johnson, he completed each of the three games started, earned a 1-2 record, but accumulated a 1.00 ERA in those starts.
1916 was his second big league season. He started 15 games in his rookie year, and went 4-4 in those games.

The other George was one of the most dominant pitchers in the league in 1916, his third season in the majors, winning 23 games. At the conclusion of the season, he was 43-21 with a 2.11 ERA. This is George Herman “Babe” Ruth. He was the ace of the Red Sox pitching staff, and also tied for the team lead in home runs. He hit 3 in 136 At Bats.
Of course we know about Babe's 714 lifetime homers and 60 homers in 1927, but we forget that he set the record for the lowest ERA by a left-handed pitcher in 1916, with a 1.75. That record would fall to Ron Guidry of the Yankees in his incredible 1978 season.

The second George was George Harold “Gorgeous George” Sisler. A University of Michigan graduate, who earned a degree in mechanical engineering, he was a sweet swinging left-handed hitter who set the all-time record for hits in a season with 257 in 1920. That record was later broken by Ichiro Suzuki in 2004. His 1920 season is regarded as one of the greatest offensive seasons ever. He hit .407, was responsible for 30.11% of the runs scored by his team that year.
In 1922, Sisler hit .420, and also led the league in hits, runs scored and stolen bases. He had three or more hits in 36 games, and went without a hit in just 17. He was elected to the Hall of Fame in 1939. 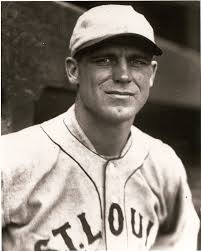 Here's a trivia question...Who was the last .400 hitter to appear in the World Series in the year he did it?
None of them.

Other items of note for the 1916 season at hand:

The upstart Federal League folded at the end of 1915, and their anti-trust suit against organized baseball was dismissed by Judge (not yet baseball commissioner) Kennesaw Mountain Landis.
The Chicago Whales (or ChiFeds as they were sometimes called) were owned by Charles Weeghman. Weeghman purchased controlling interest in the Chicago Cubs prior to the 1916 season (with candy magnate William Wrigley as a minority stock holder) and moved the Cubs into the stadium which had been built for the Whales.
Moving from the West Side Grounds, the Cubs would enjoy playing in the friendly confines of Weeghman Park, soon to be called Wrigley Field, for the next hundred years and beyond.
Weeghman Park was the first baseball stadium to let the fans keep the balls that were hit into the stands.

Staying in the National League, Grover Cleveland “Pete” Alexander of the Phillies won pitching's Triple Crown. He led the league in Wins, ERA and strikeouts. He pitched 16 shutouts, which set the record which has not been broken (and probably won't be). For perspective, Chris Sale of the White Sox led the majors in 2016 with 6 complete games, 10 less than Alexander's shutouts. Clayton Kershaw of the Dodgers led the majors in shutouts with 3.

One June 22nd, the Boston Braves pulled off a rare triple steal in the 11th inning to beat the New York Giants. How rare you ask? To this day, it remains the only time in National League history that it has been done in extra innings. It was done in the American league in 1941.

Hal Chase became the second Cincinnati Reds player to win the batting title and lead the league in hits, and was the first National Leaguer to lead in batting in his first season with a new team. 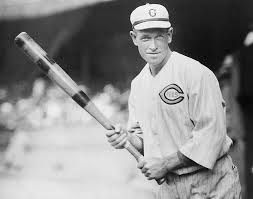 .
The Brooklyn Robins (named for their manager, Wilbert “Uncle Robbie” Robinson) won their first pennant this year, beating the Phillies by 4 ½ games. The Braves finished third, four games out. But the talk of baseball for the last month of the season was the seemingly hard charging New York Giants.
On September 7th, they were in fourth place, fourteen games behind the leaders when they beat the Robins, 4-1. The Giants would then go on to win an all-time record 26 straight games (including a tie) before losing the second game of a doubleheader to the Boston Braves, 8-3. Interestingly, the streak was entirely accomplished at home. Twenty-six straight home games. Obviously, the Giants played better at home, but they also reeled off a seventeen game winning streak that season as well, all of the seventeen were on the road. So exactly half of the Giants' victories came in those two streaks. They remain the only team to have two streaks of fifteen or more wins within the same season.
At the conclusion of the second streak, the Giants were still in fourth place, but just five games out. They finished the season in fourth, seven games off the pace.

An aside about Wilbert Robinson...In 1915, he helped with a publicity stunt involving a female aviator named Ruth Law. Robinson, a catcher by trade, and by all accounts, one of the better defensive catchers of the day, (he was the first catcher to play directly behind the batter) agreed to catch a baseball that would be tossed out of an airplane piloted by Ms. Law.
Now, from this point, accounts vary, but I will go with the version that I had heard many years ago.
Dodger outfielder, and known prankster, Casey Stengel convinced Ms. Law that she should throw a grapefruit instead of a baseball, using the logic that a baseball from that height (over 500 feet) could severely injure Robinson if he were to miss it. And knowing Casey the comic relief of the grapefruit, being much bigger than the baseball, would be a sight.
At the appointed time, Law took to the air, reached her altitude, and tossed the grapefruit. Robinson, in position, circled under the falling orb, and as Casey had thought, was unable to make a clean catch. (remember too, at this point in baseball history, gloves were not very sophisticated) The grapefruit deflected off of Robinson's hands and exploded onto his chest, knocking him to the ground.
The following messy splatter, combined with the acid from the fruit landing in his eye made Robinson convinced that he had been blinded and seriously aimed. His concern stopped when he saw his teammates laughing at him.
From that day on, whenever he saw an airplane, he would refer to them as 'fruit-flies'.

Joe Bush was the first to pitch a no-hitter during an eventual 20 loss season. ( he finished at 15-24).
Pitcher Jack Nabors won against the Red Sox, and Rube Foster, on April 22nd. He then went on to lose his next nineteen decisions, something which has never been done in a single season since. 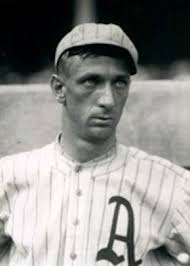 In fact, Nabors would never win another game, finishing with a 1-25 record in 52 games pitched.

Walter Johnson of the Senators, became the ninth pitcher to both win 20 games and lose 20 games in the same season. It would be 57 years before Wilbur Wood would be the next to do it. Johnson also had the third lowest ERA for a 20 game loser (1.90). This would be Johnson's fourth straight year in leading the league in wins, fifth straight year in leading in shutouts, and his seventh straight 20 win season.
It was the first time that a pitcher had led the American League in wins while his team had a losing record. Eppa Rixey of the Reds would replicate the same feat, the fourth time in National League history. 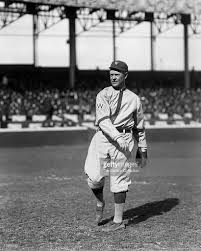 Wally Schang of the Philadelphia Athletics was the first batter to homer from each side of the plate in the same game. 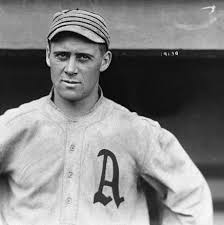 Ray Schalk of the White Sox would steal 30 bases, an American League record for catchers that would last until John Wathan of the Royals bested it in 1982. 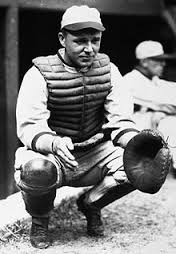 Tris Speaker of the Indians became the 3rd American Leaguer to lead the league in batting in his first season with his new team. He was also the third Indian to lead in batting as well.

Ty Cobb of the Tigers won both his fifth Stolen Base title, and his firth Runs Scored title.

Wally Pipp became the first New York Yankee to lead the league in home runs. Pipp would later be replaced at first base by Larrupin' Lou Gehrig. 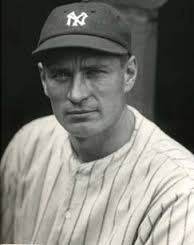 Now for George Herman Ruth.
The Babe became the youngest American League pitcher to win 20 games in a season, ( he was truly just a babe, just 21 years old) collected the third lowest ERA in Red Sox history, and tied for the team lead in home runs. Babe hit 3 in 136 at bats. He appeared in 23 games beyond those he pitched in. He averaged a home run every 45.3 at bats, which would have placed him second in the league behind Frank “Home Run” Baker, who homered every 36 at bats. Babe hit 21.4% of the Red Sox 14 homers that season.

The World Series featured the Brooklyn Robins, who had never finished higher than 2nd in the modern era, and the Boston Red Sox, who were somewhat of a dynasty at this point. The Sox would be in the midst of four World Series wins in the seven years between 1912 and 1918. 1916 would be the second consecutive World Championship, and are the first American League team to win back-to-back World Series'. 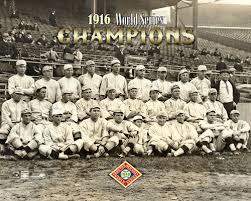 Remember, it was the Red Sox that won the very first World Series in 1903.
Babe Ruth pitched in Game 2, going 13 scoreless innings for the win. He would extend his scoreless innings streak to 29 innings during the 1918 Series. That record would stand for forty-three years until Whitey Ford broke it in 1961.

Okay, let's delve into the statistics from 1916. We'll start with the National League offense which was the lowest offensive performance.

And then, against their team averages, the top performers were:

Over in the American League, who statistically performed 7% better than their hitting counterparts in the Senior Circuit, we get these initial rankings:

Then compared to their teams performances, we get:

Next, we'll look at the pitching, where the National League hurlers ranked 4% better statistically than the American League, in a very pitching dominant era. I will highlight the Runs Allowed instead of ERA because of the fielding conditions and equipment of the era.

In the National League, the initial rankings are:

And comparing to their teams performances, we get the following:

Over to the American League, our initial rankings are:

There were no post season awards given during this era, so once again I have full reign, as well as 20/20 hindsight as to which awards should be given after the fact. So, in each league, the voting would be as follows:

In the National League, the Player of the Year top five would be: 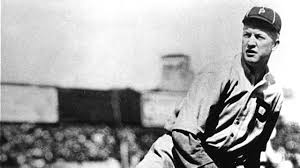 And Pete Alexander would also win the Pitcher of the Year award, easily. 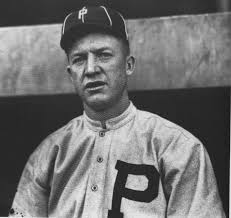 In the American League, the Player of the Year rankings would be: 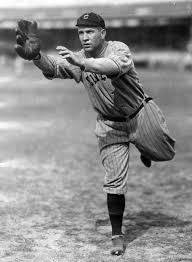 And Babe Ruth would be the Pitcher of the Year. 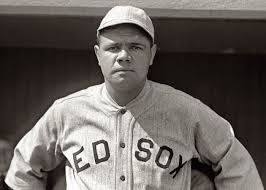 Posted by Baseball Mike at 9:17 AM