With the passing of the legendary pitcher Denton True Young in 1955, baseball commissioner Ford Frick decided to honor the legendary hurler by naming a post season pitching award after him. The “Cy Young Award” has been awarded every year since 1956.
Don Newcombe of the Brooklyn Dodgers was the first winner of this prestigious award, which was given to just one pitcher per year. That practice ended with the passing of Commissioner Frick in 1966.
His replacement, Lt. Gen. William Eckert decided to expand the award, and to award it to a pitcher from each league, and that tradition has continued to this day. This past season saw Jake Arrieta of the Cubs and Dallas Keuchel of the Astros.

It is nice to recognize Cy Young (The nickname is a shortened version of the word Cyclone) since he has set records that it is safe to say will never be broken. His 511 wins comes to mind. Right now, a pitcher would have to win twenty-five games a year for twenty years, and then win eleven more just to tie the record. You have to go back to 1990 to find the last pitcher to win twenty-five in a season, and then go back another twelve years to find the next twenty-five game winner.
Young won twenty-five or more on twelve occasions, and topped thirty wins five of those seasons. In 1893 he won thirty-four games, but tied for second in the league behind Frank Killen of Pittsburgh.
Young also started more games than anyone else, toeing the rubber 815 times. Nowadays pitchers rarely start more than 33-35 games per season. To match Cy Young, a pitcher would have to average 35 starts for over twenty-three seasons.
He also lost 316 games, a record that no one will ever want to come near. That one is losing 15 games a year for twenty-one seasons, which more than likely won't be done again either.
Pitching in an era that was full of contact hitters, Cy held the all-time strikeout record, with 2,803 over his twenty-two years. His highest single season total was 210 in 1905, and he topped the 200 strikeout plateau one other time in his career.
He is credited with throwing the first perfect game in major league history, in 1904. There's a story there.
Rube Waddell of the Philadelphia A's, one-hit Boston in early May, and taunted Cy Young into changing his schedule so that they would face each other, and Waddell said he would repeat his performance. They met three days later, and Young pitched the perfect game. The twenty-seventh and last batter Young faced that day was Waddell himself. (Modern day fans note, there was no pinch hitter for Waddell, who made the final out, and took a complete game loss.

Born in 1867, Young began his career with the Cleveland Spiders on the National League as a twenty-three year old rookie in 1890. He pitched for Cleveland until his contract was transferred to the St. Louis Perfectos in 1899. That team was owned by the same man that owned the Spiders, and pulled all of the best players to his St. Louis team to create a powerhouse. (It didn't work, as the Perfectos finished fifth) In 1900, the St. Louis team was re-branded as the Cardinals, as we know them today.
In 1901, Young joined the Boston Americans (eventually to be called the Red Sox) and pitched for them until 1911, when he split his time as a forty-two year old between the Cleveland Naps (Indians) and the Boston Rustlers (Braves).
He was in the second class of players named to the Baseball Hall of Fame in 1937. 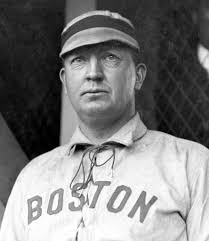 Born a twenty years later, in 1887, Walter Johnson had an arm described by Ty Cobb as “the most powerful arm ever turned loose in a ballpark”.

“The Big Train” went 5-9 with a 1.88 ERA and his Runs Allowed was very respectable 2.86 in his debut season of 1907. He would then earn double digit wins for the next twelve years, and then eighteen of the next nineteen years.
Johnson is second in career wins with 416, holds the record for most shutouts with 110, (twenty more than Pete Alexander, and thirty-five more than Young) and finished with a career ERA of 2.17. He became the first pitcher to reach 3,000 strikeouts in a career, and was the only one in that club until Bob Gibson reached that magical number in 1974. And his 3,508 strikeout total would take fifty-five years before Nolan Ryan would surpass it.
His 1.14 ERA in 1913, and is still the lowest ever for a pitcher with more than 300 innings pitched in a season. He won twenty or more games twelve times, winning thirty twice. He spent the entirety of his career in Washington, pitching in 2 World Series, winning one in 1924. He was one of the original five inductees into the Baseball Hall of Fame in 1936. 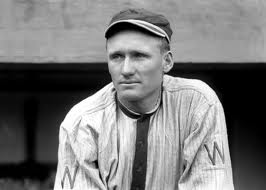 While both pitchers are legends, I feel that Johnson was a better pitcher than Young. In using the Hall of Fame criteria of ten years in the league, I will use the top 10 seasons of their careers to compare them. Since Young pitched in a different era of the game, one that the pitcher's mound was fifty feet away from home plate, and for a time, it was seven or eight balls for a walk, the top ten gives us a better gauge of their careers.

For Young, his top ten years are as follows:

Bear in mind that the ERA was not officially recognized as a statistic until 1920, so these numbers were culled from baseball-reference.com but these are the statistics that have been handed down for many years as accurate.

If it were up to me, and it is most definitely not, each post season, pitcher would be awarded the Walter Johnson Award.