1965 saw a few modern, curious firsts. The Houston Colt .45's became the Astros, and moved into the first domed stadium in sorts. Dubbed the 'Eighth Wonder of the World", it opened with an exhibition game against the Yankees in April, and saw Mickey Mantle hit the first indoor home-run. It was also The Mick's only indoor home-run. 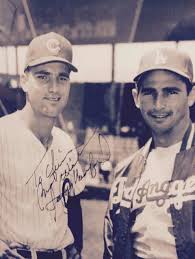 Sandy Koufax of the Dodgers and Bob Hendley of the Cubs combined for one of the most amazing games in baseball history. Hendley walked outfielder Lou Johnson, who was sacrificed to second base, then stole third base, and scored the game's only run on a throwing error by Cubs catcher Chris Krug.
On Johnson's next at-bat in the seventh, he doubled. It was the only hit of the game, for either team. And he was the only base runner, as Koufax pitched a perfect game.
Cubs catcher Chris Krug had a brief major league career, and apart from this game, his other claim to fame is being the builder and architect for several baseball fields, most notably the field used in the movie "Field of Dreams."

This season saw one of the most horrific bench clearing brawls in history, the sight of Juan Marichal striking Johnny Roseboro over the head with his bat shocked the nation, and rocked the baseball world.
For those who may not be familiar with the story, Marichal was at bat for the Giants, and took offense to the way that Dodger catcher Roseboro threw the ball back to Sandy Koufax, and thought that the throws were a little too close to his ear. Words were exchanged, and then tempers got the best of everyone. Instantly, the sight of Marichal, bat over his head and coming down atop Roseboro, hushed the crowd and totally shocked onlookers. 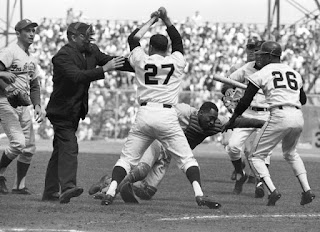 Several players, from both teams, were able to wrestle the bat from Marichal, while Giants star outfielder Willie Mays hurried a now bloody John Roseboro into the dugout for immediate medical attention, while the on-field melee ensued. 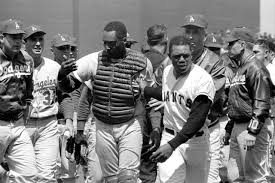 1965 also saw the first ever player draft, with picking outfielder Rick Monday as the first ever draft choice. Other players of note in the first few rounds of that draft were Joe Coleman, Ray Fosse, Del Unser, Jim Spencer, Larry Hisle, Andy Messersmith and Ken Holtzman. 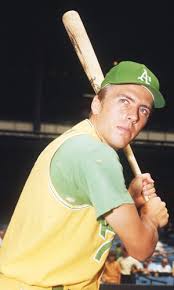 Hal McRae and Sal Bando both went in the sixth round, Tom Seaver was drafted in the tenth round (by the Dodgers) and Nolan Ryan went in the twelfth round. Carlton Fisk went in the forty-eighth round to the Orioles. (He didn't sign)

The season itself ended with the recently relocated Minnesota Twins winning the pennant by seven games over the Tigers, and the Dodgers with their strong pitching edging out the Giants to win the pennant by two games.

It was the Dodgers' third World Championship since moving to the West Coast.

When one looks at the offensive numbers, we refer to the slash lines, as in HR/RBI/AVG or AVG/SLG/OPB or any variation of those numbers. So let's look at a few slash numbers for the 1965 season, using HR/RBI/AVG/Runs Scored, followed by SLG/OPS(onbase plus slugging) and runs produced per game

The way a team wins games is by scoring more runs than your opponent. Obviously. This formula that I use places more weight on the runs created than other formulas that I have seen, since scoring and winning are what the game is about. Player 1 and Player 2 above were the top 2 run producers in the for 1965.
The way one scores or creates runs is by driving in runs, but also being able to put your team in position to score runs, by sacrificing, getting on base, and getting yourself in scoring positions. This is where the OPS comes into play. Player 1 came in third in the league in OPS that year, while player 4 led the league. Player 6 is a close match to player 2 in this respect, with player 2 having a better year scoring runs (he led the league), but wasn't getting on base as easily as player 6 was.
I give this explanation as a means of the reasoning behind my rankings. In my analysis, only four of the above six players make my top ten overall list...and the league MVP was one that didn't. When I compare the stats to the rest of the league, players 1-4 are the top 4 in the league. Players 5 & 6 didn't make that cut.

But here are the overall offensive ranking top 10, with their slash numbers:

Zoilo Versalles of the Twins, Player 2 from the above chart, finished fourteenth in these rankings, but was voted the Most Valuable Player for the season. Player 6 from above was Tom Tresh of the Yankees, who ranked sixteenth.
The top 5 in MVP voting was as follows

As you can see by the absence of Los Angeles Dodgers on this list, they relied heavily on their pitching staff to carry them to the pennant, much as they did in 1963.
The NL MVP voting top 5 was
1. Willie Mays
2. Sandy Koufax
3. Maury Wills (not on my list)
4. Deron Johnson
5. Don Drysdale

The pitching is almost as muddled as the American League offense. There was only one Cy Young Award given yearly at this point, and Sandy Koufax won it, deservedly so.

So, were there a Cy Young Award for the American League, my vote would have been for Mel Stottlemyre of the Yankees.

Koufax would have been my choice in the NL. 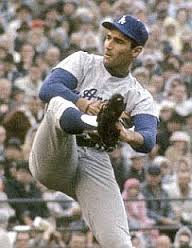 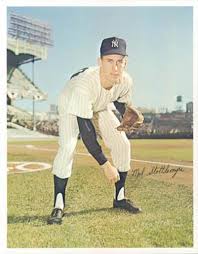 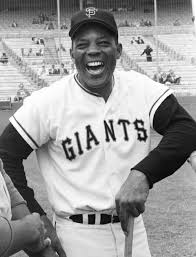 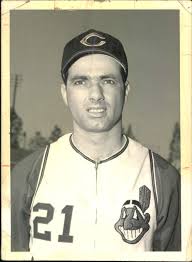 Posted by Baseball Mike at 9:00 AM